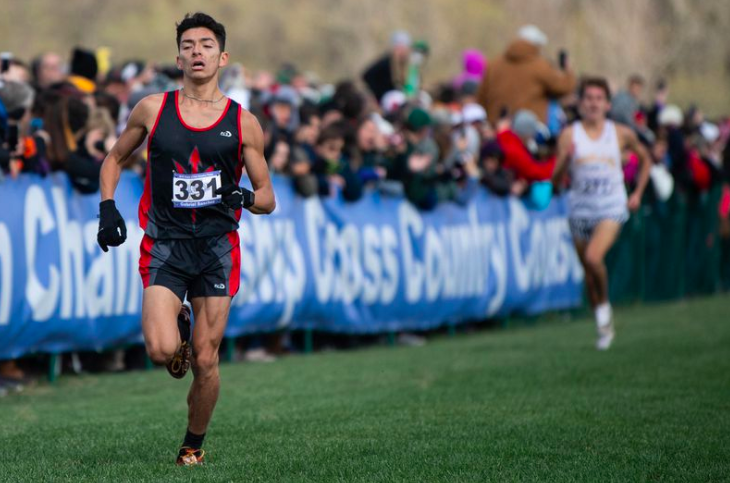 This weekend Gabriel Sanchez and Jacob Durr represented the boys cross-country team at the state meet. The cross-country state finals is the culmination of a tournament that starts with about 400 teams, and nearly 4,000 runners from around the state. In the final meet 200 runners toe the line to find out who is the best in Indiana, and this weekend it was Gabriel Sanchez.

As the race started, Gabe ran conservatively allowing other runners to set the pace. The first mile of the 3.1 mile race was run in about 4-minutes and 57-seconds. After two-miles of racing Gabe, and a small group of boys, had separated from the rest of the pack. This lead group of runners came through the 2-mile mark right around 10-minutes. From that point, three boys emerged from the lead pack: Gabe, a runner from Highland, and another from Lapel HS. Gabe then increased his pace, and pulled away from everyone with about a quarter-mile to go. Gabe ran his final mile in 4-minutes and 50-seconds, while his last 400m was a blistering 63-seconds. He is the first Lowell runner to win a state championship.

Jacob Durr finished around 100th place in the race, out of 208 runners, despite finishing 60th a year before. Unfortunately, a leg injury sustained a few weeks earlier was aggravated by the difficult course – which is home to the Indiana State University cross-country team. Although it wasn’t the finish he had hoped for, Jacob helped the team advance to the semi-state round of the tournament one week earlier. It seems that the weeks of training and racing on his injured leg had finally caught up with him.